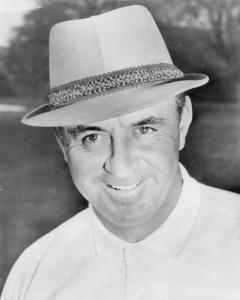 Golf legend Sam Snead was the Resident Golf Pro Emeritus from 1988 until his death in 2002. During the winter months he was frequently seen out on the golf course or at the practice range giving golf tips or telling stories of his illustrious career.

Sam Snead, winner of three Masters’ Tournaments plus many other major golf titles, made his winter home here for 14 years. In 1988 Sam Snead became the Resident Golf Pro Emeritus. While he was here he was either playing a round, on the practice tee or regaling members with tales of his many golf experiences. The Club celebrated Sam’s 90th birthday in the Spring of 2002 – just before he left to hit his last opening shot at the Masters. He passed away a short time later.

In the 1920’s what is now Meadowood Golf and Tennis Club was a virgin pine barren. The building boom at the time resulted in the cutting and selling of the timber and the land was then used for farming pineapple as well as general produce. Then, over the years, it gradually reverted to a new growth of pines.

In the mid 1970’s a developer, St. Lucie Pines, purchased the land where Meadowood now stands, planning to establish five-acre home sites. No sites were purchased and the developer sold to a French company called Nice Investment. Nice platted the lands for streets, lots and a golf course. The area was named Monte Carlo and the original plat has survived. At that time, it was difficult to move money out of France to begin the development and it was sold again in early 1980.

A German group, headed by Leopold Estein, was the purchaser. Work was begun and the clubhouse opened December 1, 1983. John Randolph McDonald from West Palm Beach was the architect of the 48,000 square foot multi-level clubhouse.

In 1985 and 1986 Monte Carlo hosted senior golf tournaments and in the late 1990s’, a Super Seniors’ event was held at Meadowood Golf and Tennis Club.

Bob Goalby has been a frequent visitor over the years. In all, four Masters’ winners have lived or played at the Meadowood Golf and Tennis Club.

The course was designed by Charles Ankrom. There are currently six sets of tees ranging from the gold tees at 6744 yards to the red tees at 5014. The course is situated on 195 acres, providing an exceptionally spacious golf experience.

Sunrise Savings and Loan, which had been financing the development, closed in 1985 and Club Corporation was hired to administer Monte Carlo.

In August 1988, the Hankins Group purchased the property. The development was renamed Meadowood and the club was incorporated under the name Meadowood Golf and Tennis Club, Inc. Extensive renovations were made to the clubhouse, tennis center and swimming pool. Three tennis courts were built with the later addition of two more courts. The condominiums were upgraded and model homes were built.

A member group headed by Ted Maurer purchased the golf course, clubhouse and tennis/swim center in November 1992. The intent was to ensure a continuing private country club operation.

The club was leased to WELP, a company headed by Lothar Estein, son of the original developer, Leopold in 1996. It was at this point that the development’s name was changed to Panther Woods and the Club’s name became Panther Woods Country Club.

In the fall of 2004 Hurricanes Jeanne and Frances wreaked havoc with the golf course and clubhouse. The course was closed for over two months; the clubhouse for six months. The happy part of this story is that the clubhouse was totally refurbished with a new roof, interior drywall, painting, carpeting etc. The Members’ Grill, smaller dining room and main dining room (which seats up to 300) are now in top-notch shape for all of our dining enjoyment and camaraderie.

After leasing the club for seven years to a private developer, the members, under the direction of an elected Board of Governors, took over the management of the Club in January 2005. Club members voted to revert to “Meadowood Golf and Tennis Club” in the October of 2009.